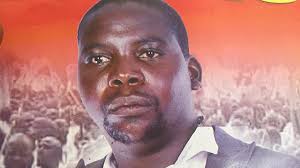 Gweru residents were left speechless after traffic was brought to a standstill along via Mambo road on Wednesday afternoon when four naked Nyau dancers on their way to Madzibaba Learnmore’s shrine for revenge blocking the road singing and dancing.

There was even more drama when the masquerades (Zvigure/Nyau) arrived at the shrine, started dancing around the congregation in an attempt to scare them away.

According to reliable sources, the masquerades were dancing and singing while threatening worshipers who had gathered for the Wednesday church service with Madzibaba Leanmore (Pictured) .  Some scared congregates attempted to flee but were told not to by the ‘back to sender prophet’ as he was taking care of the situation.

When The Sun news crew arrived at the scene there was commotion at the shrine as the masquerades were already lying down on the ground in pain begging for forgiveness from Madzibaba allegedly  claiming that they were sent by their leaders  to disrupt and plant charms at the church.

In an interview  Madzibaba Leanmore said recently he assisted a woman from Ascot suburb who had been bewitched and performed his “back to sender” resulting in the perpetrator suffering from stroke.

“This did not go down well with the leader of the masquerades who decided to send his followers to the shrine for revenge but failed. A lot of evil people in Gweru have been fighting me for the good work I am doing for people. They want me to stop fighting demons in the city but I will not stop until all the people are free from evil spirits,” said Madzibaba Leanmore.

Nyau is a secret society of the Chewa, an ethnic group of the Bantu peoples  found in most Southern African countries. The Nyau society consists of mostly initiated members of the Chewa and Nyanja people, forming the cosmology or indigenous religion of the people.

During service, The Sun news crew witnessed a Mkoba 18 woman who was blind being prayed for until she started seeing once again to the amazement of hundreds who had flocked the now popular shrine for assistance.