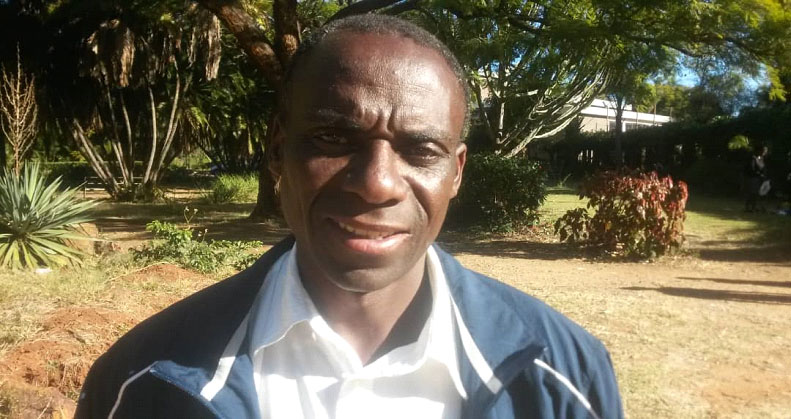 By Clive Makumbe
Gweru based evangelist who claims to have created miraculous pregnancies through prayer has taken the city by storm after several cases of his miracles were confirmed by his followers.
Prophet Pauro (pictured), who holds services at Chaplin High School is said to have powers that allow him to be able to cause infertile women to become pregnant and so far assisted dozens of couples from all over the country.

This reporter caught up with the couple who claimed that they had gone for more than five years without a child but now expect a baby in a few months’ time after visiting the prophet for spiritual healing.

The women said she fell pregnant within a space of one week after seeing the prophet, which shocked many including the family doctor who had previously tried to assist them without any success.

Sharing her testimony, Mrs Chido Musaka said she had normal menstrual periods which ended on the 15th of September 2018 and a few weeks later she visited the Founder of Light of Africa church.
“On that day, Prophet Pauro prayed for Infertile or post-menopausal women who attended his church and were told they would be having “miracle” babies. I’m now 7 months pregnant and according to the scan, I’m expecting a healthy child,” said Mrs Musaka.

Two other women who claimed that the pastor assisted them conceive and were also expecting their own babies.
“When someone falls pregnant, it is the power of God who is in heaven not of man, that would have given you the child because I am God’s messenger but without him we do not have his divine power and blessings. What the couple is saying that I helped them its true because they are my church members.

Just like Moses, God called him to act as the leader of people and communicator. I have helped many couples who have had more than six years without a child. Most complications would be spiritual or generational curses in the family,” said Prophet Pauro.
He said more than twice in his younger days when he saw stars falling from the sky upon him as well as experienced many frightening visions that later came to pass for example the closure of his businesses in Bulawayo.

For five years, he thought of committing suicide when he was bedridden with a leg problem that was nearly amputated by his doctors but one night, he saw a light from the heavens calling him to serve God in his name.
Two days later his leg was miraculously healed and his journey to serve the lord began.