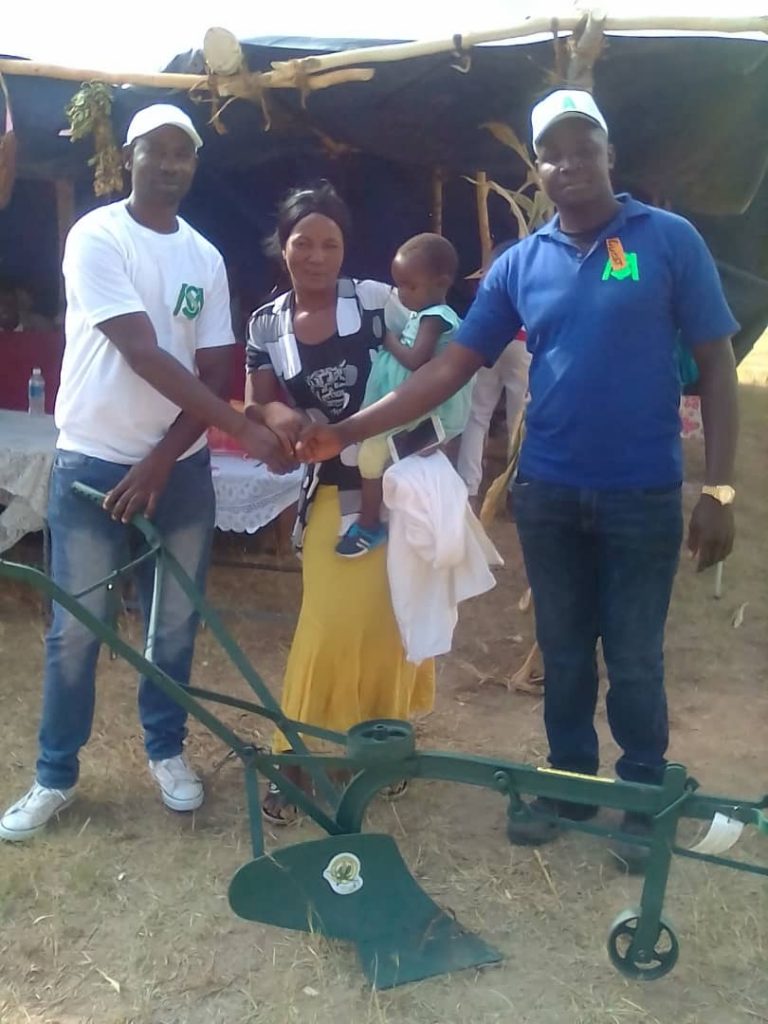 The Luyanda Irrigation Company has donated various farming equipment to communal farmers in Nyama ward 3 at a field day event held at Dhimbamihwa primary school in lower Gweru.
The ceremony was graced by the company’s director Simba Masocha who handed over the ploughing equipment to the 9 winners including Shephered Ncube who came first position and won the plough.

Simba Masocha handing over a plough to Shepherd Ncube)

He said farming keeps the youth engaged in productive activities.
“As parents you have to make sure that the younger generations take farming as means of income generating, reduces criminal activities and the spread of HIV/Aids pandemic as this will keep them busy for their survival,” said Masocha.

The local councilor Samuel Msipa acknowledged the good work and the reason for celebration in his ward.
“Today is a big day to all farmers from Makhulambila, central part and the western side of Nyama to witness the good work and we have come for the winner,” said Msipa.

He told the villagers to work as a unity and help one another in times of need especially on farming.
“We have to work hard through networking with fellow community members, extension workers and Agritex to enhance our knowledge on farming for the sake of development,” he said.
Msipa promised to give inputs to villagers who attended the event.

“I promise you that all who paid for the field day will be the first to get inputs because you have worked tireless for the successes of this event,” said Msipa.
Agritex supervisor Marvelous Mukucha applauds and encourages communities to be part of their farming programs rolled out in the ward.

“We want you to attend all farming meetings that will be organized by the department so that you will be fully equipped with proper knowledge of farming and how to protect your crops from diseases,” she said.

Thandiwe Moyo called on the local leaders to embrace power of women in farming by affording them opportunity to lead in developmental activities in the community.
“We want people to recognize the role played by women in farming as they are the ones who spend most of the time looking after the crops in the fields whilst men are working in towns and only come to receive the prices for the work, they did not put much effort,” she fumed

The occasion was attended by various local organizations and individuals which include 10 headmen’s, teachers, extension workers, Red Cross, Maso, Steward bank and local pastors among others that had partnered with the Luyanda Irrigation Company in promoting irrigation farming in the area.