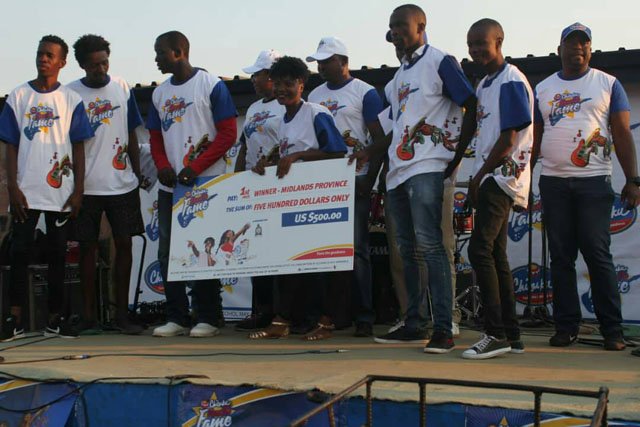 On One music group

Kwekwe music group, On One gave an astounding performance which saw them taking first place at the Midlands Chibuku Road to Fame finals.

The battle for musical recognition was held at Msika Beerhall at Mtapa  last week.

On One is set to represent Midlands province at the National finals on September 29 at Glamis arena in Harare.

The group struck the right tune and won $500 prize money as Eco-Rythes ,$300 for coming second and in third place Mopane got $200.

The championship is a partnership between Delta Beverages and National Arts Council ,which was birthed on the 27 October 2001 as a way of identifying musical talent.

On One hopes to win the National championships, like what The Travelers band which is also won last year walking away with a record deal and $7 000 prize money.

The  musical group will face other 9 provincial Chibuku Road to Fame winners from other provinces.

National Arts Council of Zimbabwe Programs officer, Honour Muvango, expressed gratitude to all contestants and hailed On One for its exceptional performance.

“As Midlands we are extremely happy that the event was a great success and we thank all groups that took part at this year’s event. Given the sterling performance exhibited by the winning group, I’m quite optimistic that On One will make it at the National Finals,” he said.

By Nisha Chirinda Artists in the Midlands are crying foul over the National Arts Merit ...