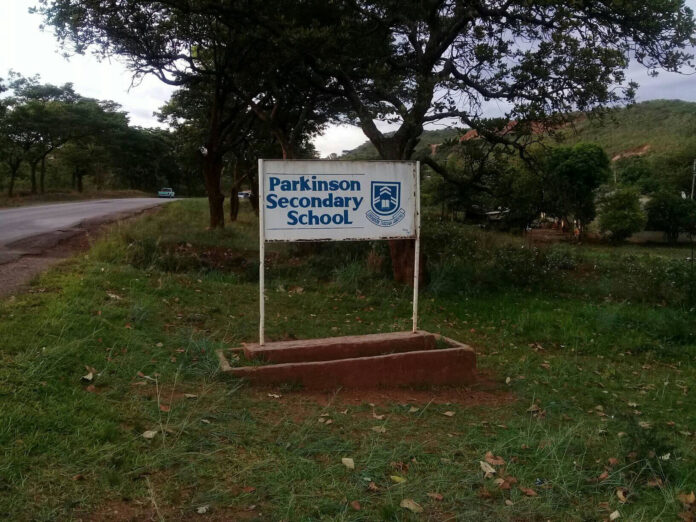 A health disaster is looming at Parkinson Secondary School in Shurugwi where pupils and teachers have gone for years without clean water after their only borehole developed a technical problem in April 2016.
The school which is located a few meters from the Boterekwa escarpment has an enrolment of 700 children; 400 girls and 300 boys, also the academic institution is complemented with 12 staff houses which are at the moment, desert dry.

Pupils and staff at the Zimasco-owned school are now using a nearby swamp which is a former Union Carbide sewage pond as a water source.

The water from the old sewage pond (KwavaDovi as they call the place) has been helpful in cleaning the school’s ablution facilities, among other water-related choices by the teaching staff.
However, the old sewage water is not hygienically pristine and not safe for use.
Some parents have since decided to withdraw their children from school due to the persistent water crisis.

The School Development Committee (SDC) Chairperson Mr Winston Nehemiah Zhou has made various efforts to contact Zimasco to rectify the problem at the school but the company is yet to respond.
His recent effort is a letter dated 22 July 2022, written to Zimasco’s General Manager and also referred to Shurugwi North Member of Parliament, District Development Committee, District Schools inspector and Shurugwi District Medical Officer.

“The District Development Committee also wrote a letter dated 8 June 2022 and still no response was offered.

“As SDC we are currently buying water for the school using well-wishers transport paying USD10 for 1000 liters per day, a situation that has become a burden for the parents,” reads part of the letter.
School pupils have bemoaned the water challenge citing that, they risk contracting diseases such as Cholera and typhoid if the problem is not rectified any time soon.

“Our situation has reached another level, our ablution facilities are always dirty due to the lack of water, even if the toilets are cleaned, we cannot flash, our school is no longer a conducive environment for learning. We appeal to the powers that be to fix our borehole before we contract cholera or typhoid,” said Brighton Saidi a form 3 student at the school.

A female student who chose anonymity said the situation was too dire for the girl child who requires the precious liquid more than the male students.

“Water and sanitation are critical to the wellbeing of the girlchild it’s a girl water affair you know!!!, also knowing that the Covid-19 pandemic is still among us we need clean water to wash our hands before we eat our lunch. I think something must be done for our borehole to be fixed,” she said.

The availability of safe and clean drinking water is a basic necessity for all living beings, the Accra declaration (2001) affirms that water is a fundamental human right, essential to human life to which every person rich or poor, man or woman, child or adult is entitled. Access to it is critical for human development.