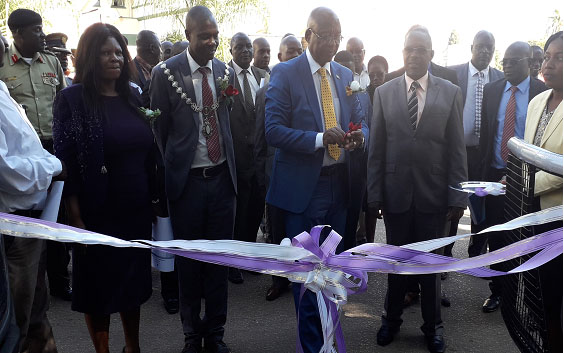 In a move to ease refuse collection challenges which were being faced by the local residents council has made steps to address the problem by acquiring two new refuse compactors trucks worth $700 000.

He said when the current council came into office, there were only three old refuse compactors which were constantly breaking down and had a challenge of door to door collection as scheduled due to constant break downs of the trucks.

commissioned today. It was not a stroll in the park as some people would like to think, initially council had set aside $320 000 for the two trucks but it ended up coming up to $700 000 due to procurement delays,” said Clr Makombe.

Council sought audience with the Minister of State for the Midlands province, Honorable Larry Mavima to assist with the release of forex from the Reserve Bank of Zimbabwe (RBZ) which was eventually done.

Clr Makombe said the two refuse compactors are going to be a special and critical addition to the three old compactors that the City of Gweru had which were not enough as the ideal situation requires ten refuse compactors, two skip trucks and two tractors.

“Such a number will adequately, effectively and efficiently service the ever increasing population of Gweru which is ballooning on a daily basis, the current trucks are on double shift due to the high demand for refuse collection. The normal life span of a refuse compactor is five years and the current ones are now way over their shelf life,” said Clr Makombe.

Let me take this opportunity to encourage business people, residents, clients and various stakeholders to support council by giving generously to health and sanitation in the City of Gweru,” said the Mayor.