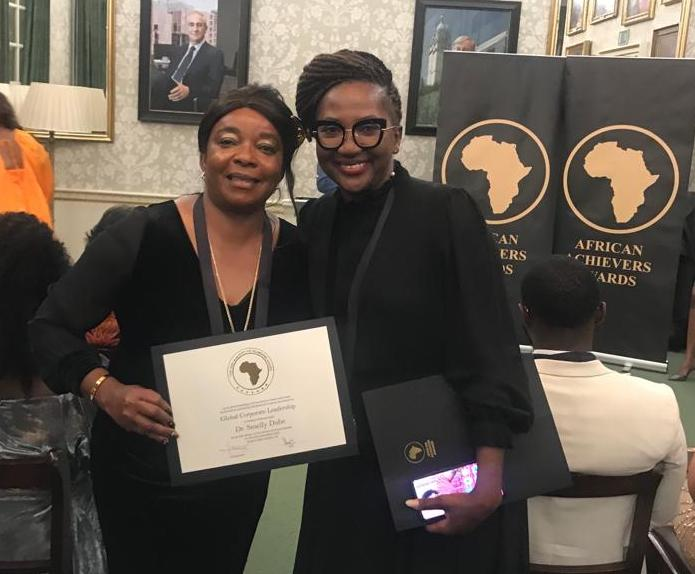 LONDON: Zimbabwean businesswoman and philanthropist, Dr. Smelly Dube was last night among over 15 influential men and women from Africa to be presented with an African Achievers Award at the  Queen’s Gate in London.

The prestigious awards are in recognition of outstanding and sterling work by men and women in the field of business, leadership, politics, and philanthropy in Africa and Africans in the Diaspora.

Dr. Dube was presented the award by former President of  Mauritius, Dr. Ameenah Firdaus Gurib-Fakim after she bagged the Global Corporate Leadership award in recognition of her business acumen in philanthropy and real estate.

Dr. Dube has been in London at the invitation of the African Achievers Awards organization where she also had the chance to lay a wreath in memory of Queen Elizabeth 11 who died last week.

The maverick Gweru businesswoman also had the privilege to sign the Queen’s condolence book after she made a courtesy call to the Deputy Speaker for Hackney, Anyah Sizer.

She said she was humbled to witness firsthand the mood and the burial ceremony of the Queen.

Dr. Smelly Dube who was accompanied by her husband and Executive Chairman of the Rivervalley Group Engineer Mncedisi Dube said she dedicated the latest feat to the company’s workers.

“It’s a privilege to be part of this whole grand ceremony, witnessing the procession leading to the Queen’s burial and having the chance to lay a wreath in memory of the Queen.

Meeting the Deputy Speaker of Hackney, Anya Sizer, and putting my signature on the official condolence book for the Queen was an experience.

“I’m also happy to raise the Zimbabwe flag higher at the awards,  especially at a time the New administration was unpacking the brand Zimbabwe project,” she added.

Below are some of the notable Individuals, and organizations who have been honored at the Prestigious Awards Ceremony over the years:

H.E. Jakaya Kikwete (former President of the Republic of Tanzania).

as a consultant at United Nations Industrial Development Organization (UNIDO). She

formerly served as the Executive Director of the Uganda Investment Authority).

ADVERTORIAL TO THE SUN